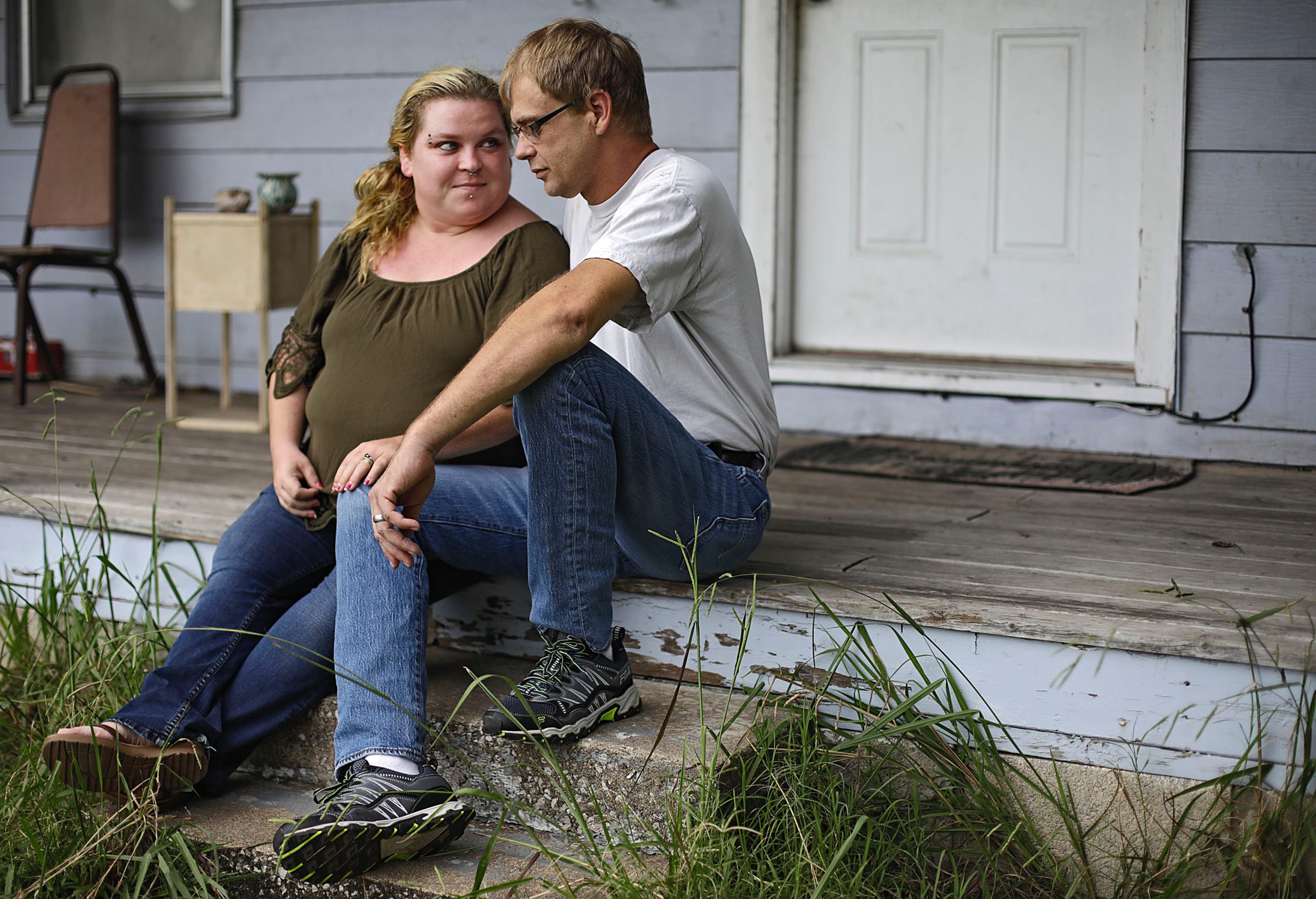 By Brenda Wintrode and Amy DiPierro


This summer, the University of Maryland’s Howard Center for Investigative Journalism told the stories of three families living on the edge of losing their homes. All faced eviction after COVID-19 cost them their jobs or their health. But each was hanging on. Barely.


Six weeks later one has a new job after being embraced by her community, one has moved into a new apartment after being forced to leave her home and the third continues to live on the edge.


Here are updates to their stories.

This project was supported by grants from the Pulitzer Center, the Scripps Howard Foundation and the Park Foundation. The reporting was a collaboration among the Howard Center for Investigative Journalism at the University of Maryland, the University of Arkansas, Boston University and Stanford University.


Members of the Oklahoma City community rallied around Ashley Fitzgibbon, a single mother of six, after a Howard Center investigation showed her landlord served her with eviction notices for four straight months, beginning in May. Fitzgibbon has since received several months of financial relief and has started a well-paying, part-time job.


The story outlining Fitzgibbon’s plight was published by news outlets across the country, including in Oklahoma. The day after it appeared, Fitzgibbon’s community overwhelmed her with support.


Ginny Carl of Community CARES Partners, a rental-assistance program in Oklahoma City, was one of the first to reach out. Carl, the nonprofit’s executive director, received messages at 6 a.m. from two colleagues urging her to find Fitzgibbon and help pay her rent.


“If we could do anything for her, we wanted to make sure that we took care of her and her family,” Carl said.


Later that night, Fitzgibbon said a couple who were previously strangers offered to pay three months of her rent in advance. They stocked her freezer with organic meat and connected her to her current job.


But the help didn’t stop there. Fitzgibbon said parishioners of Crown Heights United Methodist Church, where Fitzgibbon’s children attended a morning program before the pandemic, delivered food, Walmart gift cards and paid a portion of a large utility bill. Community CARES Partners picked up the rest of the over $1,000 bill.


The church also posted a photo of the Howard Center article to its Facebook page on Sept. 3, letting followers know Fitzgibbon’s family belonged to their community and that she was looking for work.


“Now I have several ladies that I will be cleaning their house once a month,” Fitzgibbon said.


Fitzgibbon’s family was one example of the millions of renters who were left unprotected from eviction filings during the spring and summer because they were not receiving federal financial assistance and did not live in federally subsidized housing.


During the pandemic-related shutdowns, Fitzgibbon said she lost her five jobs. But even without steady income, she managed to pay the rent each month with a patchwork of odd jobs, such as dog sitting, and helping a friend pack up her house. She also borrowed money from friends. Later in the summer, she added a third housemate to further reduce her rent payments. She had paid all her rent before community assistance arrived.


“Now, my daughter could say, ‘Hey, I need seven or eight notebooks (for school),’” Fitzgibbon said. And Fitzgibbon could reply, “OK, let’s go to Walmart; go grab some.”


“I don’t have the full-blown disease anymore, but I still have the side effects from it.”
— Yochebed Israel


In August, Yochebed Israel’s property manager dismissed the eviction to remove her from her Tampa, Florida, apartment because it violated the federal eviction moratorium in place this spring and summer. The manager, Tzadik Management, told a reporter the eviction notice was a “simple miscommunication.”


But one week later, Tzadik filed another eviction in court. According to Israel, her attorney struck a deal with Tzadik. If Israel and her family moved out by Sept. 30, she said, Tzadik would forgive all owed rent.


“They didn’t care where we left to; we just had to leave. So we did,” Israel said.


Now, the 59-year-old, her husband, her daughter and her 9-year-old granddaughter have moved into a new apartment in Tampa after living in a hotel. Israel said the family “had to start over” financially because the costs of moving have wiped out the family’s savings account.


“It took everything we had, but we did it,” she said.


Court records show the case against her has been dismissed, and that Israel does not owe any money. But the eviction filing remains an online public record.


Israel stopped paying her rent last fall after a faulty HVAC system left her with crippling utility bills. Her landlord was made aware of the broken system, but Israel said she was left to decide between paying for heat or the rent.


Israel stopped working in April after her daughter contracted the coronavirus. Public health officials told Israel, a certified nursing assistant, to quarantine at home because of her likely exposure. And they were right. Shortly after her daughter’s diagnosis, Israel said she contracted the coronavirus. She received only partial sick pay during her months of recovery, compounding her financial burden.


She said even though she has recovered from COVID-19, she still struggles with hoarseness and phlegm in her lungs.


“I don’t have the full-blown disease anymore, but I still have the side effects from it,” she said.

“We have been very blessed to get the help that we did, and I’m forever grateful for that.”
— Beth Myers


Jack and Beth Myers were featured in the Howard Center investigation in a story that examined the undoing of a rental-assistance program in Tulsa, Oklahoma.


The couple’s landlord was one of only a few who accepted back rent on behalf of tenants and agreed to not evict. But most of the landlords whose properties were eligible for the Landlord Tenant Relief Program refused the rent payments because their lawyers advised them that giving up their right to evict was too risky.


Beth was stunned to learn she and Jack were one of the fewer than 15% of eligible eviction cases in Tulsa that received help this spring.


“We have been very blessed to get the help that we did,” she said. “And I’m forever grateful for that.”


New Tulsa Housing Policy Director Becky Gligo, whose eviction prevention efforts over the past year positioned the city to help renters during the COVID-19 crisis, said she understands landlords are running businesses, but hoped for more compromise during a time of “extraordinary need.”


In August, the Tulsa Housing Authority received a $15 million grant from the county’s CARES Act funds that will be solely dedicated to rental assistance for renters faced with COVID-19-related hardship. A portion of state CARES Act funds will also be available for rental assistance. Gligo said the new program that opened Aug. 24 will not put restrictions on landlords that accept the funds.


“We made the hard but strategic choice that it’s more important right now to just keep people in their homes,” she said.


Milner said because of the lack of restrictions on landlords, he allowed several of his cases to be rescheduled so tenants would have time to apply for the latest funding.


“I think a lot more of our clients are going to be inclined to take a look at this,” Milner said.


Wintrode reported for the University of Maryland. DiPierro reported for Stanford University. Lead Photo: Tulsa’s Landlord Tenant Relief Program paid four months’ rent for Jack and Beth Myers of Tulsa County. Jack, a Type 2 diabetic, quit his job as a welder amid fear of contracting COVID-19. Beth said the program “took a lot of stress off of my husband and I.”