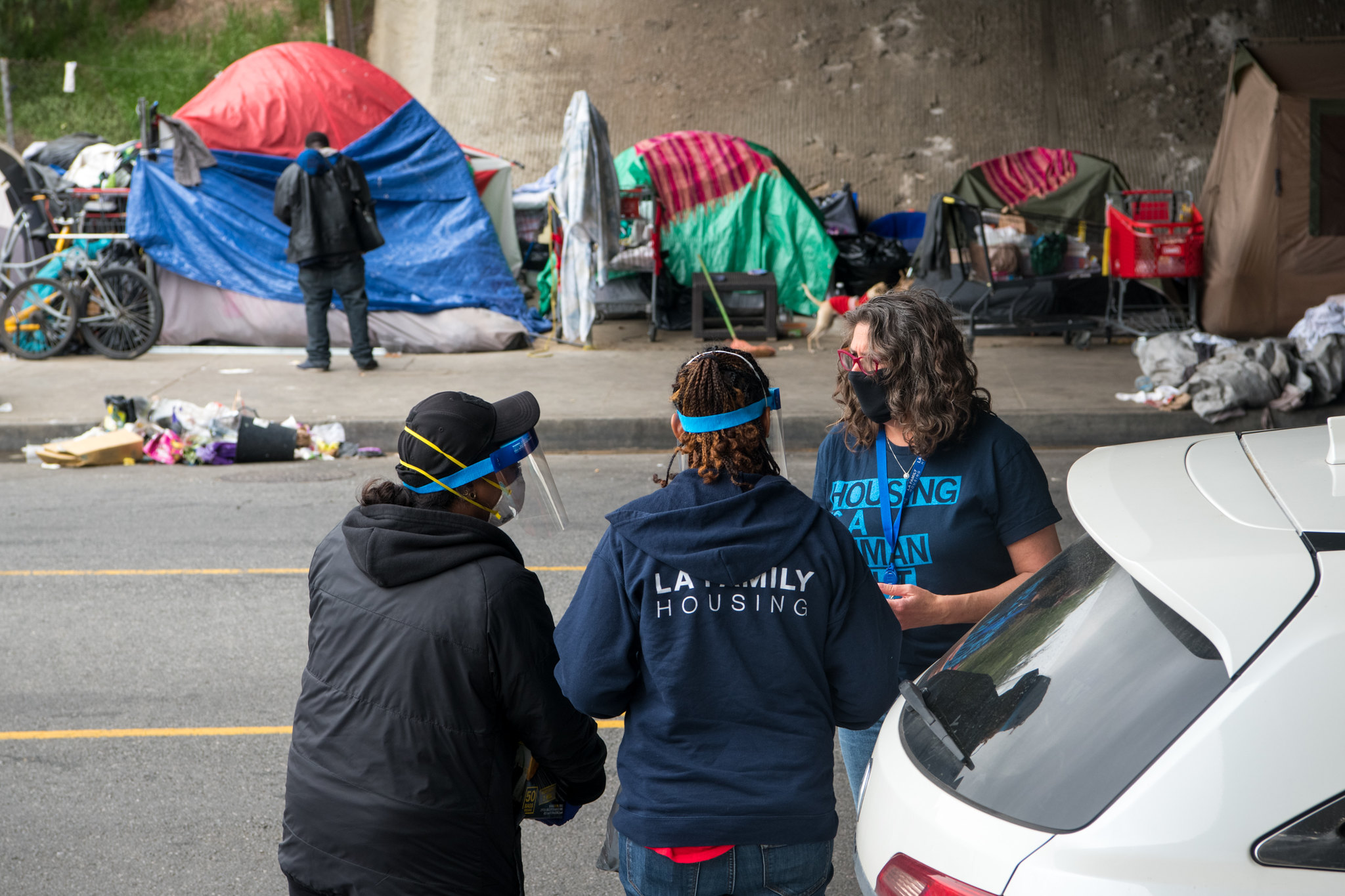 When California issued its shelter-in-place order on March 19, hotel occupancy rates throughout the state plunged into the single digits.


Meanwhile, much of the state’s homeless population — 151,000 people as of 2019 — lived in crowded shelters, on the streets or in outdoor encampments without sanitation facilities. Flash spreading of COVID-19 among the homeless was a serious public health risk.


County social service agencies have long viewed hotels and motels as attractive options for sheltering the homeless. Some local governments issue motel vouchers to homeless people, but leasing or acquiring rooms for long-term or transitional housing had been rare before Project Roomkey.


David Grusky, the director of Stanford University’s Center on Poverty and Inequality, said California’s history of addressing homelessness has been marked by policy efforts driven by good intent that ultimately failed to get the job done.


“We tend to employ Band-Aids — poorly funded, ill-equipped Band-Aids that can’t take on such a big structural problem,” he said.


Nonetheless, Grusky is impressed by the ambitious nature of Project Roomkey. “Nothing on this scale has been attempted,” he said. “It’s extraordinary.”

But in the two months since Newsom’s announcement, the undertaking has faced delays in acquiring rooms, opposition from residents and local governments, and concerns about the duration and scope of both state and federal funding.


A survey of five California counties by the Howard Center for Investigative Journalism and Big Local News found that Alameda, Los Angeles, Sacramento, San Francisco and Santa Clara counties are struggling to obtain enough hotel rooms and to fill those rooms with those in need of shelter. They collectively hold more than 58% of the state’s homeless population.


According to data provided by the state’s Department of Social Services, as of June 9 the five counties had acquired 8,984 hotel rooms, though the numbers reported by some counties differ from those reported by the state for the same time period. Nevertheless, that’s little more than a third of their combined goal of 26,898 rooms.


Statewide, the picture is more promising. At least 15,781 hotel rooms were dedicated to sheltering the homeless by late June — more than Newsom’s goal of 15,000.

The challenges the five counties have faced implementing Project Roomkey highlight the complexity of a program that relies on obtaining private property for homeless individuals in a matter of weeks when government and nonprofit advocates have struggled to house this group for decades.


Participating in Project Roomkey presented some risk for hotels and motels.


While some establishments saw the program as an opportunity to help a vulnerable group while also keeping its staff employed, other hotels were hesitant, opting to temporarily close instead of participate.


In Alameda County, hotel owners didn’t want to house “certain kinds of clients,” said Willie Hopkins Jr., director of the Alameda County General Services Agency, during a Board of Supervisors meeting in April.


To help fill the initial need, the state arranged a template agreement with Motel 6 that counties could choose to adopt to access the chain’s rooms in the state. Similarly, early in the project the state signed contracts on behalf of Alameda County to lease 393 hotel rooms from two hotels in Oakland.


But often the counties were left to make their own deals. Procurement rules were loosened to speed the process due to the pandemic, but the counties remained responsible for adequate health and safety measures, staffing, meals and other support services.


In his 30 years in the hospitality industry, Ken Westmyer was no stranger to dealing with government.


“Any county or agency usually says, ‘This is what I want,’ ” said Westmyer, the vice president of operations for the Ellis Hospitality Group, which oversees two hotels participating in Project Roomkey.


But Project Roomkey was different. “Here it was working together,” he said.


When he reached out to Santa Clara County offering the Holiday Inn Express in Sunnyvale in early March, he knew little about COVID-19. The county’s first shelter-in-place order was weeks away. Neither Westmyer nor the county knew what conditions would be necessary to use the Holiday Inn as a temporary shelter for homeless people. But the county was interested.


After two weeks of research and a consultation with the Centers for Disease Control and Prevention, Westmyer came back to the county with nonnegotiable conditions: sufficient personal protective equipment and training.


Even then, Westmyer said an insurance company dropped one of the hotels after learning about its participation in Project Roomkey.


San Francisco anticipated the complications the county would face in obtaining rooms. In April, the Board of Supervisors urged the mayor to use her authority to commandeer private rooms to meet the county’s goal after “exhausting reasonable options for securing these rooms through agreements.”


By the April 26 deadline to procure 8,250 rooms, San Francisco was short by more than 5,000 rooms. Dan Kaplan, deputy director of finance and administration at the San Francisco Human Services Agency, explained at an April 30 hearing that his administration decided “to work with its hotel partners” rather than commandeer them.


Los Angeles County planned to shelter a quarter of its nearly 60,000 homeless residents. The county contracted with more than 250 local hotels and provided shelter to 3,340 homeless individuals — about 22% of its goal — by the first week of June.


But the county’s efforts were complicated by city officials in Bell Gardens, Norwalk and Lawndale, who tried to stop the initiative, citing governmental secrecy.


Lawndale’s city attorney, Tiffany Israel, wrote a letter to the operator of a hotel in Lawndale that stated the agreement with the county “to become a temporary homeless shelter” was “negotiated and executed in complete secrecy” without any input from the city. The letter threatened that if the agreement between the hotel and the county were not terminated, the city would push the Planning Commission to consider revoking the hotel’s special use permit.


Lawndale Mayor Robert Pullen-Miles said his city’s biggest objection to Project Roomkey was how it was implemented and how city officials were kept in the dark.


“When we heard about this program, they had already entered into a quick agreement with the hotel. They did not do any type of outreach to the community,” he said.


In Southern California, Laguna Hills, a city in Orange County, has also resisted.


Susan Shelley, an Orange County resident, said no one was told whether a neighborhood establishment was participating in Project Roomkey and what terms were negotiated to house homeless people there.


“No one in the communities knew that it was happening,” Shelley said.


Moreover, she said Orange County residents didn’t know whether the contracts allowed for future purchase of a hotel or motel to shelter homeless people long term.


Information available to the public about the procurement process and the participating businesses varied across the five counties surveyed.


Los Angeles and San Francisco provide the most frequent updates. Los Angeles County started to release a daily dashboard as early as March 23. San Francisco began releasing its daily updates on April 28. Both dashboards show the number of hotel rooms acquired, and the number of rooms occupied; San Francisco also notes whether the Project Roomkey rooms shelter individuals who tested positive for COVID-19 or are at risk. Neither provides the names of the hotels and motels, although Los Angeles provides a location.


Alameda and Santa Clara counties initially reported with less frequency but released the names of participating hotels and motels. On May 11, Santa Clara voted to create a daily dashboard that would also include expenditures.


Sacramento County was the most secretive of the five counties. Janna Haynes, a county spokesperson, said the county will not release the names nor locations of Project Roomkey hotels to avoid having homeless people congregating outside.


Without a uniform tracker across the participating 58 counties, some numbers reported by the counties conflict with the state reports obtained by Big Local News. For example, in Los Angeles where there is daily information, a comparison of the county’s report for June 9 with the state report of acquisition shows a discrepancy of 700 rooms.


A spokesperson for the California Department of Social Services confirmed the state’s report uses numbers directly reported by the counties. The variation could be explained by county reports including other noncongregate shelter options, like trailers, or including rooms used to quarantine COVID-19 patients from the count.


When the federal government offered to help finance rooms in hotels and motels for the homeless, 42 of the state’s 58 counties jumped at the opportunity.


The California State Legislature pledged $150 million and FEMA said it was ready to reimburse up to 75% of Project Roomkey costs.


At the end of June, state officials deemed the program a success and extended additional funding to counties to launch into the next phase of a homeless housing initiative.


But the amount FEMA will reimburse the counties for the previous costs remains unclear. Its program only reimburses the cost of housing homeless individuals who are COVID-19 positive, exposed to the virus, or considered “high risk” due to their age (over 65) or underlying health conditions.


A San Francisco ordinance, for example, includes all homeless San Franciscans, with priority for “especially vulnerable groups,” including homeless individuals over age 60.


“ While I’m arguing as persuasively as I possibly can for more resources for the homeless … the other half of my brain is saying … as quickly as the economy is declining and local government revenues are degrading, where is the money going to come from? ”
— Dave Cortese, Santa Clara County Board of Supervisors

Alameda County wants to lease more hotels and fill them with people coming from unlicensed boarded care homes and other transitional housing, said Lucy Kasdin, director of Alameda County Health Care for the Homeless. But deviating from the official project guidelines could jeopardize the county’s ability to be fully reimbursed.


County agencies running the program did not always know if each of their expenses qualified for reimbursement by FEMA, but spent the money anyway, said Dave Cortese of the Santa Clara County Board of Supervisors.


“Normally that would get someone fired in a noncrisis,” Cortese said. “But this is not ordinary.”


Now, the counties and the state are shifting to longer-term solutions. On June 30, Newsom announced the expansion of Project Roomkey with a $1.3 billion allocation from the state budget to homeless housing and planning initiatives. Racing against the deadline before federal funding disappears, the state seeks to adopt a solution to address homelessness by converting hotel lease agreements into purchasing deals. The new initiative is called Project Homekey.


The state will draw on $550 million from the CARES Act and $50 million from state general funding to restore and repurpose various forms of housing in addition to hotels and motels: vacant apartments, residential care facilities, tiny homes. All of these spaces will be devoted to homeless individuals.


Cortese said the shorter-run FEMA money will come. The bigger concern, he said, is whether this future funding to shelter homeless people will follow, especially as the state prepares for an economic recession.


“While I’m arguing as persuasively as I possibly can for more resources for the homeless … the other half of my brain is saying … as quickly as the economy is declining and local government revenues are degrading, where is the money going to come from?” Cortese said.


“This [recession] is by orders of magnitude the worst fiscal situation we’ll ever face and it’s at a time when the social safety net is needed more than ever to protect the vulnerable.”


Delianne, Dworetzky, Moser, Ochavillo and Baucom are from the Graduate Program in Journalism at Stanford University

‘Are you going to feed us to the wolves’ when temporary respite ends?