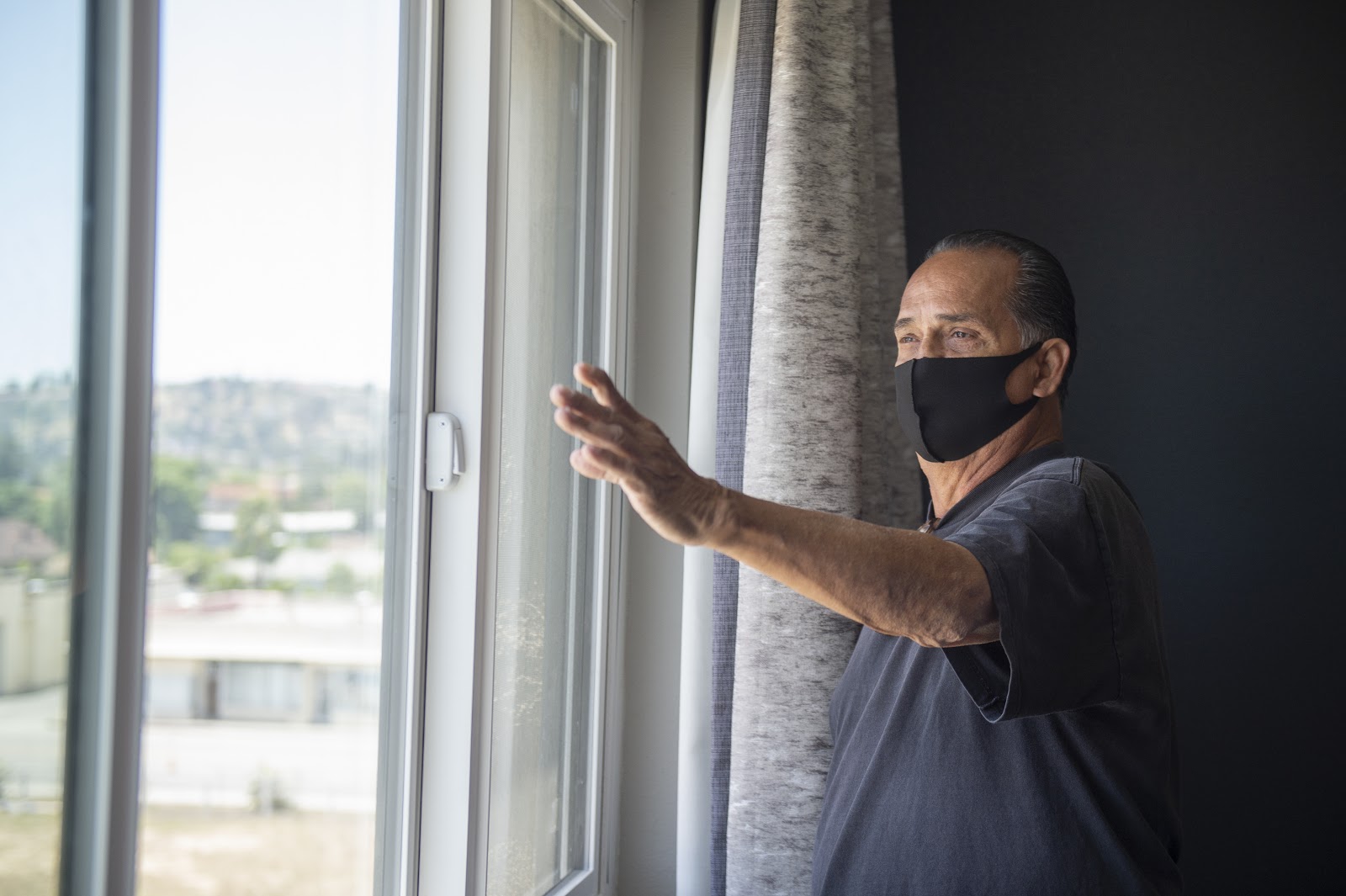 
Mike Melcher didn’t have a home. It was the third week of March and Melcher, 63, was living out of his truck in Covina, California.


Until then, he thought he would be safe from COVID-19, keeping distance from others and using the restrooms at 24-hour restaurants like Denny’s. But the virus was spreading throughout Los Angeles County and restaurants began to close.


“It got to a point when the virus came around, there were no public restrooms whatsoever,” he said. “I had no place I could go to.”

On top of that, he said, “The virus scared the hell out of me.”


Before he was homeless, Melcher said he was an insurance estimator for 30 years. “I made good money and started an auto shop business, which I ran successfully until I turned to drugs,’’ he said.


One month after he got clean in the spring of 2018, Melcher said he suffered a stroke. It put him in the hospital, out of work and onto the streets. The stroke also resulted in the loss of his driver’s license.


“I’d never been to a hospital in my life,” Melcher recalled thinking as he looked up at bright hospital lights from a gurney.


After getting out of the hospital, Melcher eventually got his driver’s license back and, with the help of his son and brother, put together enough money to buy the small truck. He said he chose to live in the truck because he didn’t want to be a burden on his family.


Told by his doctor that he was at risk of another stroke, Melcher stopped working and began to live off $800 in food stamps and Social Security.


The doctor also diagnosed him with rheumatoid arthritis, which made moving around painful. “I would basically sit in my truck throughout the whole day and just people watch,” Melcher said. “There was nothing else for me to do.”


One morning in the middle of April, Melcher started his truck, worried about the gas he was burning to scout out bathrooms and other services. He drove to five separate places in search of a bathroom. Everywhere he went, he saw signs hanging on business doors: “Closed due to COVID-19.”


“’Oh my God. What am I going to do?’” Melcher recalled thinking as he drove to building after building, only to see the lights out and chairs flipped on top of tables.


He got the answer to his question later that afternoon. His phone rang and it was one of his doctors, who connected him to the Health Homes Program, a system under the California Department of Health Care Services.


Because of his stroke and arthritis, Health Homes referred Melcher to Project Roomkey, a first-in-the nation plan to house 15,000 homeless individuals in vacant hotel rooms to combat the spread of COVID-19. To qualify in Los Angeles County, people had to be age 65 or older or have underlying medical conditions.


Two days later, on May 14, Melcher arrived at the Lincoln Plaza, a participating hotel in Monterey Park, just east of Los Angeles. Excited to get off the streets, he showed up at the seven-story hotel at 11 a.m. — three hours early.


“Wow, look at this place,” Melcher remembered thinking as he walked into his temporary home feeling a bit overwhelmed.


The first floor was designated as office space for the Union Station Homeless Service, the nonprofit tasked with running the hotel site. The second and third floors were under construction so Melcher, the 30th person to arrive at the hotel, was put on the fourth floor.


The double room he was assigned had two beds, a 60-inch TV, a mini-fridge and even his own restroom where he could shower. The days of driving around town looking for somewhere to clean up and relieve himself were finally over.


What most caught Melcher’s attention, however, was not what he saw inside the room, but what he could see outside.


“I get to look out at my dad and grandpa everyday.”
— Mike Melcher

“The view is overwhelming,” Melcher said. “I haven’t closed my window since I got here.”


His window overlooks a green hillside. To the right, he can see rolling hills. Downtown Los Angeles is just on the other side. To the left he can see the cemetery where his father and grandfather are buried.


“I get to look out at my dad and grandpa everyday,” he said.


Melcher gets meals brought to his door three times a day and, if he’s still hungry, can find leftovers in a large refrigerator on the first floor. His meal deliveries are accompanied by a health check to make sure he isn’t exhibiting any symptoms of COVID-19.


Every morning, Melcher takes a hot shower and makes a cup of coffee. Because he isn’t too fond of the meals that are served at the hotel, he often gets in his truck, which he is able to keep on-site, and goes to a local store to pick up food.


Often, he sees other homeless people who are staying at the same hotel walking with bags of groceries and will pull over to offer them a ride.


Anytime he returns to the hotel, he said one of the two on-site nurses checks his temperature. He also must go through a metal detector and any items he brought back with him are searched.


“I actually really appreciate that they do that,” Melcher said.


Back in his room,  Melcher likes to turn on the big, flat-screen TV and watch cowboy movies. His favorite is “True Grit.’’


Recently, the hotel staff began activities for everyone. Sundays are movie nights and a group of Project Roomkey participants added bingo to the weekly activities schedule.


Although he is happy with almost every aspect of his Project Roomkey experience, one thing that worries Melcher is what is going to happen to him once the program ends.


“What are you guys going to do after the 90 days?’’ Melcher recalls asking on-site workers. “Are you going to feed us to the wolves?”


He has been assured by Project Roomkey officials that they will do everything they can to find him permanent housing once the hotel contract expires. It was extended at the end of June.


But with no firm, long-term plan, Melcher is concerned he will soon be back on the streets.


For now, though, it’s enough to have a safe place to lay his head at night.


Baucom is from the Graduate Program in Journalism at Stanford University.